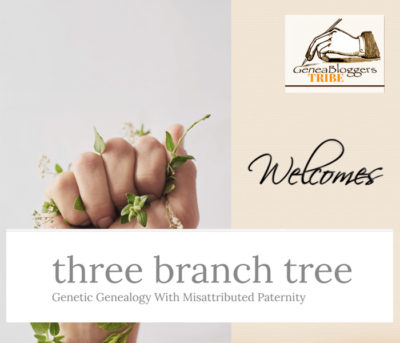 Join​ ​us​ ​in​ ​welcoming Three Branch Tree ​blog to​ ​the​ ​GeneaBloggersTRIBE membership​ ​roll.

Laurie Pratt created Three Branch Tree in March 2017 for people that have discovered through DNA testing that they have misattributed paternity.

As her welcome message says “You should know that you’re far from alone.  As the popularity of commercial DNA testing has risen from companies such as Ancestry, 23andMe, and Family Tree DNA (among others), so to has the number of people that make this same discovery about themselves”.