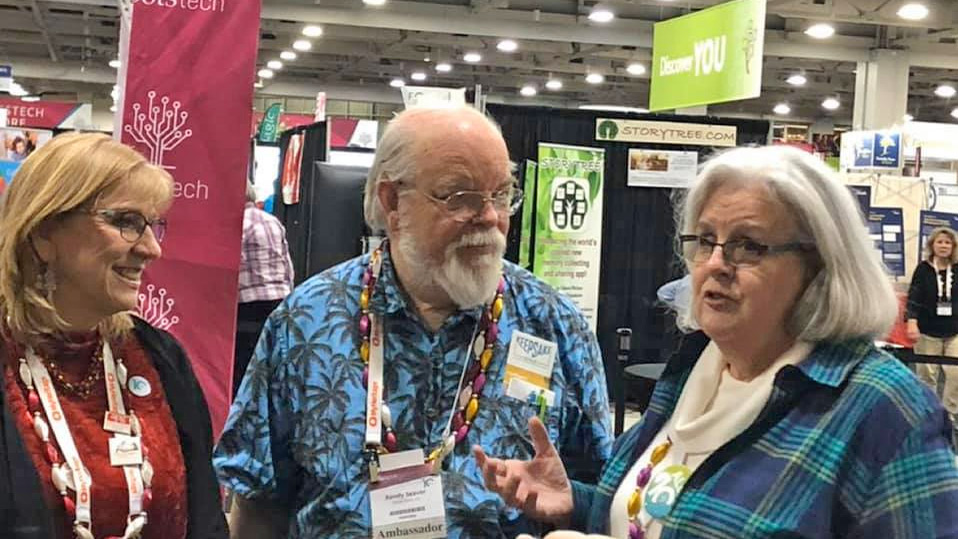 While GeneaBloggers gathered on Friday to have a group photo taken, we surprised Randy Seaver with two well-deserved awards.

Pat Richley-Erickson did the presentation honors:

Welcome GeneaBloggers! We gather for our annual group photo, this time at RootsTech 2020. For those of you watching this recording, the background noise is from the very busy Exhibit Hall.

We are joined today by GeneaBlogger’s President Laura Hedgecock. I’m DearMYRTLE, and am humbled to speak with you today.

What began in 2007 as Jasia Smasha’s “Carnival of Genealogy” morphed into the GeneaBloggers group supporting online genealogy writers.

In Jan 2008, Kathryn Doyle and LindaRae Palmer (footnoteMaven) wanted to produce a style guide for the term “GeneaBloggers” because at the time various genealogy bloggers were referring to the fledgling organization as genea-bloggers, GeneBloggers, genealogyBloggers, etc. This was to avoid confusion and was similar to the AP style guide for journalists.

All this was long before any type of bloggers in general began to wield power.

GeneaBloggers itself is a volunteer organization created by a core group of bloggers dedicated to advancing those who blogged genealogy. Jasia Smasha, Kathryn Doyle, LindaRae Palmer (footnoteMaven), Miriam Robbins, Randy Seaver, and Terry Thornton aka The Graveyard Rabbit (may he Rest In Peace) were part of that core group.

The expressed purpose of GeneaBloggers is to:
* support genealogy bloggers including content-providers on a variety of platforms
* share information on resources

GeneaBloggers has emerged as a vibrant community of content providers supporting one another with expertise and encouragement as we share our family histories. Our members provide a wide variety of genealogy content across numerous only platforms including blogging, vlogging, podcasting, and employing nearly all forms of social media.

Today  we’d like to honor one of those original “founders” of GeneaBloggers.

At that point, Randy Seaver was asked to step forward, as Pat continued with his many, many blogging accomplishments through his Genea-Musings blog.

If you’re wondering how many posts Randy has posted over the years, we were too.  The answer:  Over 13,000.

In addition to prolific blogging and supporting other bloggers, Randy 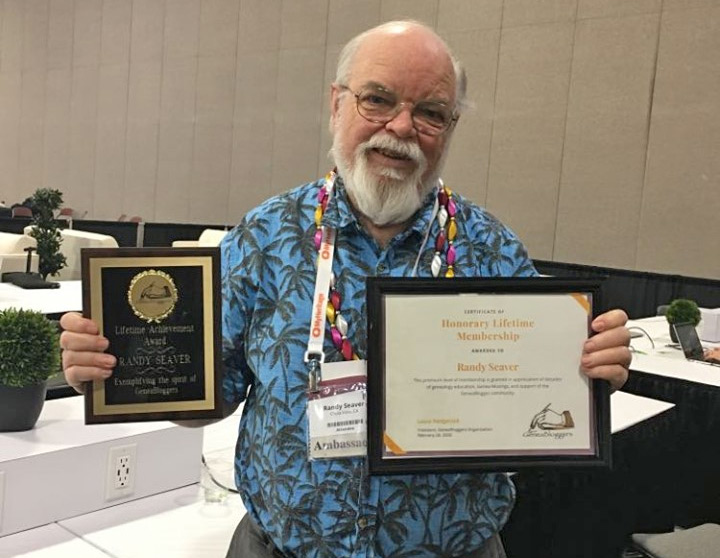 Randy with his plague and certificate.  The plaque reads “GeneaBloggers Lifetime Achievement Award, Randy Seaver,  Exemplifying the Spirit of GeneaBloggers

The GeneaBloggers Board also votes unanimously to award Randy with a Honorary Lifetime Premium Membership.

If you get a chance, reach out to Randy to extend your congratulations.