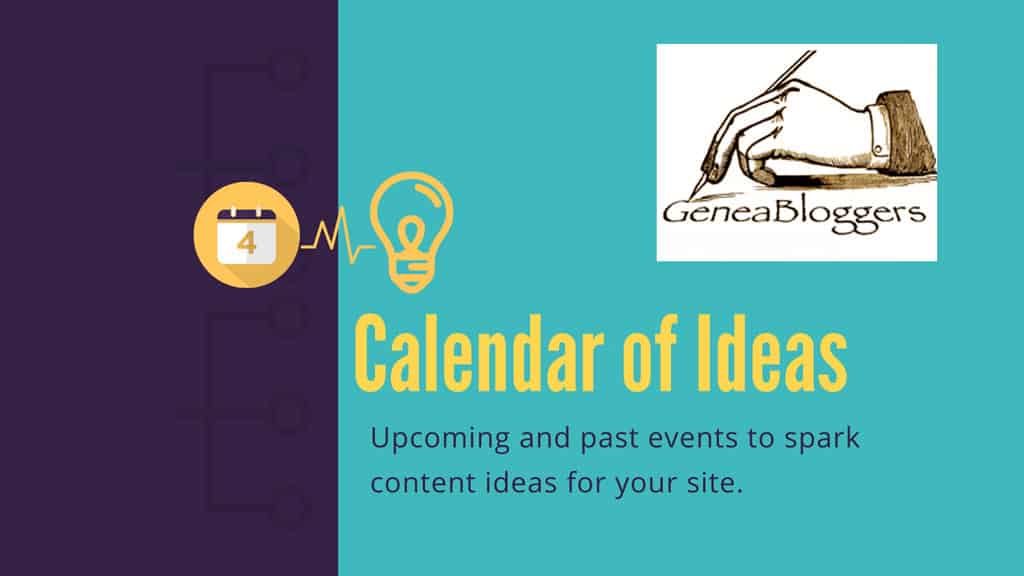 Looking for Content Sparks? Our Calendar of Ideas should help you find creative topics for your blog or site. You can also use our Daily Prompts for inspiration.

The GeneaBloggersTRIBE leadership team compiled this calendar of ideas with the help of Chase’s Calendar of Events. As you look at the listings, think how they might relate to your genealogical research, stories of handed down the family tree, historical context for you ancestors, or your own memories.

Dec 9, 1960. One of the UKs longest-running television series, Coronation Street depicts the working-class denizens of a neighborhoodin Manchester, England. Created by Tony Warren, this soap is a cultural touchstone, and show story lines have been reported on the news. Its 7,000th episode aired Jan 28, 2009.

Dec 9, 1792. The first formal cremation of a human body in America took place near Charleston, SC. Henry Laurens, colonial statesman and signer of the Treaty of Paris ending the Revolutionary War, in his will provided: I do solemnly enjoin it on my son, as an indispensable duty, that as soon as he conveniently can, after my decease, he cause my body tobe wrapped in twelve yards of tow cloth and burned until it be entirely consumed, and then, collecting my bones, deposit them wherever he may think proper. Laurens died Dec 8, 1792, at his plantation and was cremated there.

Dec 9, 1906. Born at New York, NY. When she retired from the US Navy at the age of 79, she was the oldest naval officer ever on active duty. She attained the rank of rear admiral and was a leader in the computer revolution, having developed the computer language COBOL. Grace Hopper died Jan 1, 1992, at Arlington, WV.

Dec 10, 1815. Born London, England, the only legitimate child of Romantic poet Lord Byron, Lovelace was an applied mathematician and author of the worlds first detailed description of a computer in her work Notes, which appended an article about friend/ mentor Charles Babbages Analytical Engine. She is hailed as the worlds first computer programmer for her work describing how to derive Bernoulli numbers on Babbages machine.Despite her significant contributions, she only signed her work with her initials so as not to upset societal norms. The contemporary Ada computer language is named for her. Lovelace died Nov 27, 1852, at Marylebone, England.

Human Rights Day is on 10 December each year, marking the adoption of the Universal Declaration of Human Rights in 1948.

Dec 10, 1898. Following the conclusion of the Spanish-AmericanWar in 1898, American and Spanish ambassadors met at Paris, France, to negotiate a treaty. Under the terms of this treaty, Spain granted the US the Philippine Islands and the islands of Guam and Puerto Rico and agreed towithdraw from Cuba. Senatorial debate over the treaty centered on the USsmove toward imperialism by acquiring the Philippines. A vote was taken Feb6, 1899, and the treaty passed by a one-vote margin. President William McKinley signed the treaty Feb 10, 1899.

Dec 11, 1936. Christened Edward Albert Christian George AndrewPatrick David, King Edward VIII was born at Richmond Park, England, on June 12, 1894, and became Prince of Wales in July 1911. He ascended to the English throne upon the death of his father, George V, on Jan 20, 1936, but coronation never took place. He abdicated on Dec 11, 1936, in order to marry the woman I love, twice-divorced American Wallis Warfield Simpson. They were married in France, June 3, 1937. Edward was named Duke ofWindsor by his brother-successor, George VI. The duke died at Paris, May28, 1972, but was buried in England, near Windsor Castle.

Dec 12, 1863. Born at Lten, Norway, Munch was a painter andprintmaker whose work influenced the development of German Expressionism. Munchs use of bold lines, violent imagery and blunt sexuality shocked conventional society, but he called it soul painting. His most famous work, The Scream (1893), has become an icon of the anxiety inherent in modern consciousness. In 2012, at $ 120 million, it became the most expensive work of art ever sold at auction. Munch died at Ekely, Norway, on Jan 23, 1944.

Dec 13. Gingerbread decorating is a classic holiday tradition for all ages: few things can serve as a more festive centerpiece than a gingerbread house. Decorating gingerbread houses is easy and brings the whole family together. Adults and kids can have a ball decorating with their favorite candies to create roof tiles, holly wreaths and playfully patterned window designs. The results and memories will be special. Ideas, instruction, recipes, trouble-shooting and more at the Wilton website. Annually, the second Saturday in December.

Dec 13. The horse is a living link to the heritage and history of our nation and represents a common bond among all peoples who led the way in building our country. Today, the horse industry contributes more than$ 112 billion annually to the American economy. Therefore, the CaliforniaState Legislature (as well as the US Senate) has declared the second Saturday of December to be the Day of the Horse in honor of these magnificent creatures.

Dec 12. The legend of Guadalupe tells how in December 1531, anIndian, Juan Diego, saw the Virgin Mother on a hill near Mexico City. She instructed him to go to the bishop and have him build a shrine to her on the site of the vision. After his request was initially rebuffed, the Virgin Mother appeared to Juan Diego three days later. She instructed him to pick roses growing on a stony and barren hillside nearby and take them to thebishop as proof. Although flowers do not normally bloom in December, JuanDiego found the roses and took them to the bishop. As he opened his mantleto drop the roses on the floor, an image of the Virgin Mary appeared among them. The bishop built the sanctuary as instructed. Our Lady of Guadalupebecame the patroness of Mexico City and by 1746 was the patron saint of all New Spain and by 1910 of all Latin America.

Dec 12. A day to enjoy poinsettias and to honor Dr. Joel Roberts Poinsett, the American diplomat who introduced into the US the Central American plant that is named for him. Poinsett was born at Charleston, SC,Mar 2, 1799. He also served as a member of Congress and as secretary of war. He died near Statesburg, SC, Dec 12, 1851. The poinsettia has becomea favorite Christmas season plant.

In Sweden, Saint Lucia day is a national holiday – a celebration of the festival of light. Young girls dress as Saint Lucia, with a headdress of candles serving guests coffee and lussekatter (saffron buns).

Dec 13, 1991. North and South Korea signed a treaty of reconciliation and nonaggression, formally ending the Korean War 38 years after fighting ceased in 1953. This agreement was not hailed as a peace treaty, and the armistice that was signed July 27, 1953, between the UN and NorthKorea, was to remain in effect until it could be transformed into a formal peace.

Dec 14, 1799. The first president of the US died at his home at Mount Vernon, VA, shortly before midnight. He had battled a sudden acute respiratory infection and been bled four times. I die hard, but I am not afraid to go were his famous near-dying words. After he confirmed his own burial plans, Washingtons actual last words were, Tis well. He wasmourned throughout the US and in Europe.

Dec 14, 1911. The elusive object of many expeditions dating from the 17th century, the South Pole was located and visited by Roald Amundsen with four companions and 52 sled dogs. All five men and 12 of the dogs returned to base camp safely. Next to visit the South Pole, Jan 17, 1912, was a party of five led by Captain Robert F. Scott, all of whom perishedduring the return trip. A search party found their frozen bodies 11 monthslater.

If you can say that your job or even your life is like tryingto herd cats, then this day is for you with our sympathy.

Dec 15, 1939. One of the 20th centurys biggest film blockbusters premiered on this date in Atlanta, GA. Based on Margaret Mitchells bestselling and Pulitzer Prize winning novel of Civil War passions, the film starred Vivian Leigh and Clark Gable and was produced by the dynamic David O. Selznick. It won an unprecedented eight Academy Awards, including best picture. Hattie McDaniel won a best supporting actress Oscar the first time an African-American actor had won or been nominated. No film would touch its Oscar achievement or monetary grosses for decades. At the chilly Atlanta premiere, more than 300,000 people lined the streets to catch sight of the films stars arriving at the Loews Grand Theater.

Dec 16, 1864. On the second day of battle at Nashville, Uniontroops defeated Confederate forces under General John B. Hood, essentially knocking the Confederate Army of Tennessee out of the war.

Dec 16, 1944. A German offensive was launched in the Belgian Ardennes Forest, where Hitler had managed to concentrate 250,000 men. The Nazi commanders, hoping to minimize any aerial counterattack by the Allies, chose a time when foggy, rainy weather prevailed and the initial attackby eight armored divisions along a 75-mile front took the Allies by surprise, the Fifth Panzer Army penetrating to within 20 miles of crossings on the Meuse River. US troops were able to hold fast at bottlenecks in the Ardennes, but by the end of December the German push had penetrated 65 miles into the Allied lines (though their line had narrowed from the initial 75 miles to 20 miles). By that time the Allies began to respond, and the Germans were stopped by Montgomery on the Meuse and by Patton at Bastogne. The weather then cleared and Allied aircraft began to bomb the German forces and supply lines by Dec 26. The Allies reestablished their original line by Jan21, 1945.

Dec 16, 1770. Regarded by many as the greatest orchestral composer of all time, Ludwig van Beethoven was born at Bonn, Germany. Impairment of his hearing began before he was 30, but even total deafness did nothalt his composing and conducting. His last appearance on the concert stage was to conduct the premiere of his Ninth Symphony, at Vienna, May 7, 1824. He was unable to hear either the orchestra or the applause. Often in love, he never married. Of a stormy temperament, he is said to have died during a violent thunderstorm Mar 26, 1827, at Vienna.

Dec 16, 1773. Anniversary of Boston patriots boarding of British vessel at anchor at Boston Harbor. Contents of nearly 350 chests of teawere dumped into the harbor.