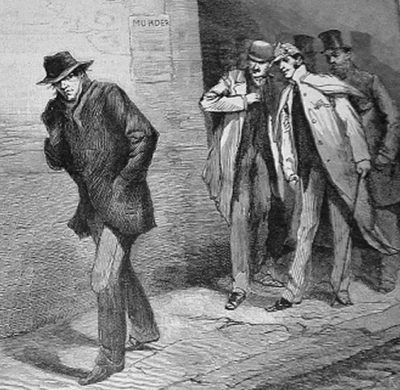 Aug 31, 1888. At 3: 40 AM, the body of Mary Ann Nichols was found in the impoverished Whitechapel district of London, England. This was( debatably) the first in a series of brutal murders that autumn that claimed the lives of at least five women, perhaps more, by a serial killer who has come to be known as Jack the Ripper because of the mutilations he inflicted on his victims. The ferocity of the Whitechapel killings created an Autumn of Terror in which the entire populace of London was terrified and where mobs frequently tried to mete out justice to suspects they picked. Mary Kelly, found Nov 9, is considered the last victim. No suspect was ever tried for the murders.

Image: Public Domain. Located at wikipedia.org, “One of a series of images from the Illustrated London News for October 13, 1888 carrying the overall caption, “With the Vigilance Committee in the East End”. This specific image is entitled ‘A Suspicious Character’.”