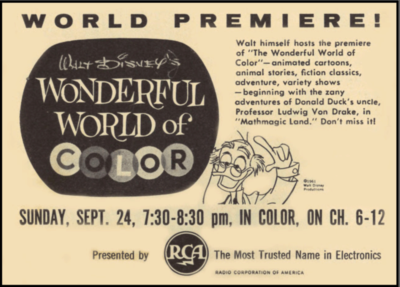 Oct 27, 1954. This highly successful and long-running show appeared on different TV networks under different names but was essentially the same show. It was the first ABC series to break the Nielsens top 20 and the first prime-time anthology series for kids. Walt Disney was originally titled Disneyland to promote the park and upcoming Disney releases. When it switched networks, it was called Walt Disney’s Wonderful World of Color to highlight its being broadcast in color. Presentations featured edited versions of previously released Disney films and original productions (including natural history documentaries, behind-the-scenes peeks at Disney shows and dramatic shows, such as the popular Davy Crockett segments, which were the first TV miniseries). The show went off the air in December 1980 after 25 years, making it one of the longest-running series in prime-time TV history. In 1997 ABC revived the series as Wonderful World of Disney.