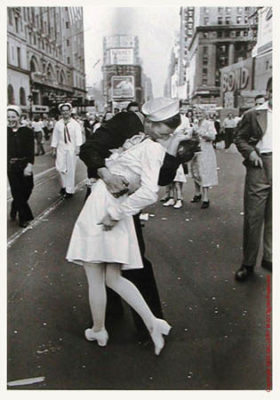 Lt. Victor Jorgensen – US archives “New York City celebrating the surrender of Japan. They threw anything and kissed anybody in Times Square.”

Sept 2, 1945. Official ratification of Japanese surrender to the Allies occurred aboard the USS Missouri at Tokyo Bay Sept 2 (Far Eastern time) in 1945, thus prompting President Truman’s declaration of this day as Victory-over-Japan Day. Japans initial, informal agreement of surrender was announced by Truman and celebrated in the US Aug 14.