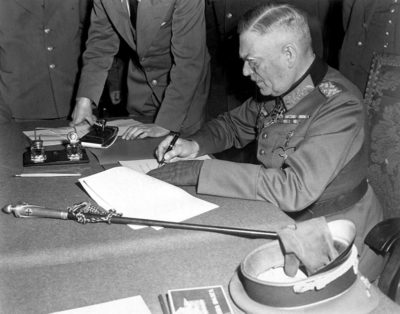 8 May 1945. Victory in Europe Day commemorates unconditional surrender of Germany to Allied forces. The surrender document was signed by German representatives at General Dwight D. Eisenhower’s headquarters at Reims to become effective, and hostilities to end, at one minute past midnight May 9, 1945, which was 9: 01 PM, EDT, on May 8 in the US. President Harry S Truman on May 8 declared May 9, 1945, to be V-E Day, but it later came to be observed on May 8. A separate German surrender to the USSR was signed at Karlshorst, near Berlin, May 8.