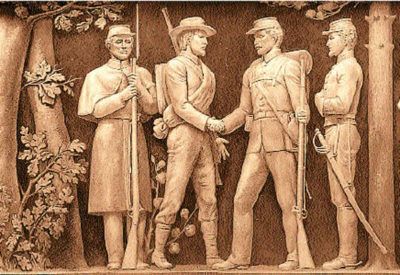 On 9 April 1865 at 1:30 PM General Robert E. Lee, commander of the Army of Northern Virginia, surrendered to General Ulysses S. Grant, commander in chief of the Union Army, ending four years of civil war. The meeting took place in the house of Wilmer McLean at the village of Appomattox Court House, VA. Confederate soldiers were permitted to keep their horses and go free to their homes, while Confederate officers were allowed to retain their swords and sidearms as well. Grant wrote the terms of surrender. Formal surrender took place at the courthouse on 12 April. Death toll for the Civil War is estimated at 500,000 men.