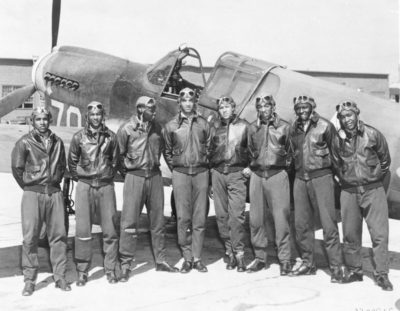 On 22 March 1941, the pioneering and highly decorated WWII African-American aviator unit gained their name during training at the US Army airfield near Tuskegee, AL, and at the Tuskegee Institute. They were activated as the 99th Pursuit Squadron and later formed the 332nd Fighter Group (with the 100th, 301st and 302nd squadrons); 992 black pilots emerged from training to fly P-39, P-40, P-47 and P-51 aircraft in more than 15,000 sorties in North Africa, Sicily and Europe. On escort missions, they were the only unit that never lost a US bomber. They shot down 111 enemy planes and destroyed 273 planes on the ground. Lieutenant Colonel Benjamin O. Davis, Jr— later the US Air Force’s first black general— was their commander. When President Harry Truman integrated the US military, the all-black group was deactivated.