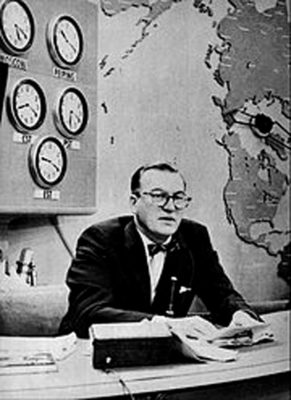 Jan 14, 1952. NBC program that started the morning news format we know today. Captained by Dave Garroway, the show was segmented with bits and pieces of news, sports, weather, interviews and other features that were repeated so that viewers did not have to stop their morning routine to watch. The segments were brief and to the point. Sylvester Weaver devised this concept to capitalize on television’s unusual qualities. What used to take three hours to broadcast live across the country was done in two with videotape on a delayed basis. The addition of chimpanzee J. Fred Muggs in 1953 helped push ratings up. There have been a number of hosts over the years, from John Chancellor and Hugh Downs to Tom Brokaw, Bryant Gumbel and Matt Lauer. Female hosts (originally called “Today Girls”) have included Betsy Palmer, Florence Henderson, Barbara Walters, Jane Pauley, Katie Couric and Meredith Viera.