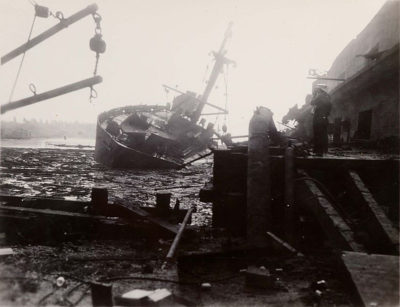 16– 17 April 1947. The worst industrial disaster in US history. The French-owned Grand-camp, docked at the oil and port town of Texas City, TX, and carrying a load of ammonium nitrate, was discovered to have a smoldering fire in the hold. At 9: 12 AM, as onlookers gathered and a small firefighting team attempted to extinguish the blaze, the ship exploded with tremendous force, immediately killing everyone at the dock area. The resulting fires destroyed the nearby Monsanto Chemical Company and spread through oil pipelines into the city.

At 1 AM, another ship, the High Flyer, exploded. The city was left defenseless due to the deaths of almost the entire fire department. There were 576 known casualties, but most estimate that at least 100 more died in the conflagrations. Thousands were injured. The fires burned for a week. The disaster prompted new regulations on handling chemicals. With thousands of lawsuits, the US Congress passed a special act to settle claims in 1956.