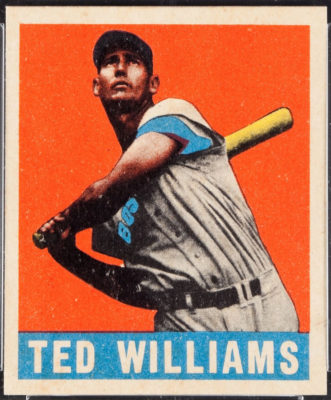 Aug 30, 1918. Born Theodore Samuel Williams at San Diego, CA, Ted Williams played his first major league baseball game for the Boston Red Sox on Apr 22, 1939. In the years that followed, he became known as perhaps the best hitter ever to play the game. His career batting average was. 344, and his record average of. 406 set during the 1941 season stands unsurpassed. He played 19 seasons for the Red Sox, but during the prime of his career, he missed three full seasons while serving as a navy pilot in WWII and most of two seasons serving as a marine pilot in the Korean War. He was elected to the Baseball Hall of Fame in 1966. He died July 5, 2002, at Inverness, FL.