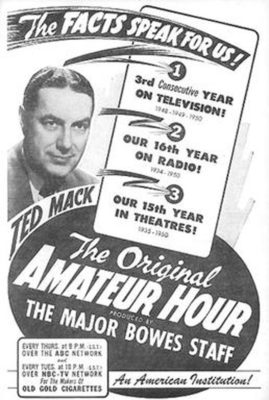 Jan 18, 1948. This immensely popular show, featuring host Ted Mack, introduced amateurs performing their talents on live television. It debuted as a regularly scheduled broadcast on the DuMont network. The show had been a long-running success on radio as “Major Bowes’ Original Amateur Hour” until the death of Edward Bowes. Mack became host of the radio show a year later. While a few episodes were televised in 1947, the show did not air weekly until this date. The program ran until 1970 and also continued on radio until 1952.