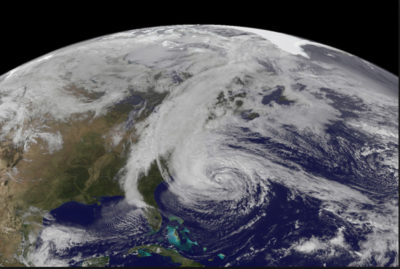 Oct 29, 2012. The superstorm almost 900 miles in diameter at landfall in the US hit Atlantic City, NJ, on the evening of Oct 29, 2012, and wreaked havoc across the northeastern US. As a category 1 hurricane beginning on Oct 24, Sandy had swept through the Caribbean (causing 60 deaths in Haiti). By landfall on Oct 29, it was an extra-tropical cyclone. The loss in life in the US was more than 125 people; the damages were estimated at almost $ 50 billion. More than 8 million people were left without power. The storm affected the Mid-Atlantic states as well, causing three inches of snowfall in that region.