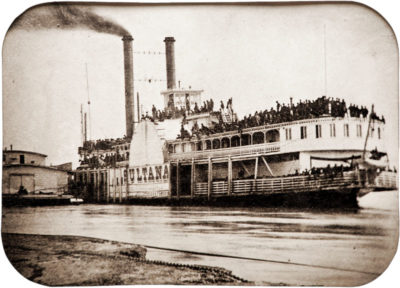 On 27 April 1865, early in the morning on this day, America’s worst steamship disaster occurred. The Sultana, heavily overloaded with an estimated 2,300 passengers, exploded in the Mississippi River, just north of Memphis, Tennesee en route to Cairo, Illinois. Most of the passengers were Union soldiers who had been prisoners of war and were eagerly returning to their homes. Although there was never an accurate accounting of the dead, estimates range from 1,450 to nearly 2,000. Cause of the explosion was not determined, but the little-known event is unparalleled in US history.