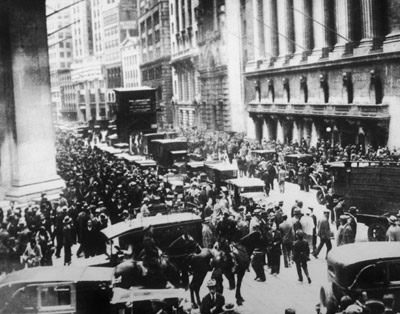 Oct 29, 1929. Prices on the New York Stock Exchange plummeted and virtually collapsed four days after President Herbert Hoover had declared, The fundamental business of the country is on a sound and prosperous basis. More than 16 million shares were dumped, and billions of dollars were lost. The boom was over, and the nation faced nearly a decade of depression. Some analysts had warned that the buying spree, with prices 15 to 150 times above earnings, had to stop at some point. Frightened investors ordered their brokers to sell at whatever price. The resulting Great Depression, which lasted until about 1939, involved North America, Europe and other industrialized countries. In 1932 one out of four US workers was unemployed.