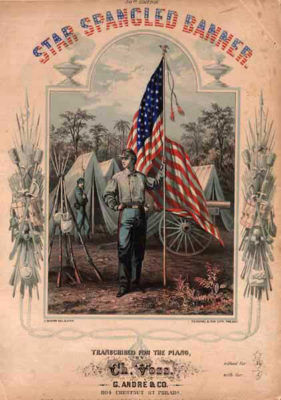 Sept 13 14, 1814. On the night of Sept 13, Francis Scott Key was aboard a ship that was delayed in Baltimore harbor by the British attack there on Fort McHenry. Key had no choice but to anxiously watch the battle. That experience and seeing the American flag still flying over the fort the next morning inspired him to pen the verses that, coupled with the tune of a popular drinking song, became our official national anthem in 1931, 117 years after the words were written.  Read more at http://amhistory.si.edu/starspangledbanner/.