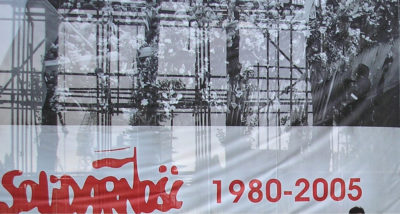 Gdansk, Poland: The 25th anniversary of the Solidarity movement.

Aug 31, 1980. The Polish trade union Solidarity was formed at the Baltic Sea port of Gdansk, Poland. It was outlawed by the government,and many of its leaders were arrested. Led by Lech Walesa, Solidarity persisted in its opposition to the Communist-controlled government, and Aug 19, 1989, Polish president Wojciech Jaruzelski astonished the world by nominating for the post of prime minister Tadeusz Mazowiecki, a deputy in thePolish Assembly, 1961 72, and editor in chief of Solidarity’s weekly newspaper, bringing to an end 42 years of Communist Party domination.

Image: Photographer Valdoria placed this image in the public domain at wikimediacommons.org.