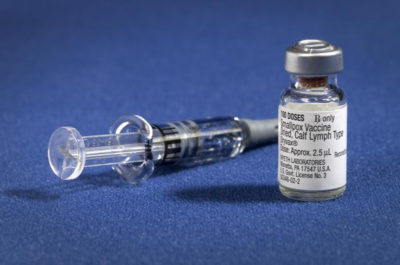 14 May 1796. In the 18th century smallpox was a widespread and often fatal disease. Edward Jenner, a physician in rural England, heard reports of dairy farmers who apparently became immune to smallpox as a result of exposure to cowpox, a related but milder disease. After two decades of studying the phenomenon, Jenner injected cowpox into a healthy eight-year-old boy, who subsequently developed cowpox. Six weeks later, Jenner inoculated the boy with smallpox. He remained healthy. Jenner called this new procedure vaccination, from vaccinia, another term for cowpox. Within 18 months, 12,000 people in England had been vaccinated and the number of smallpox deaths dropped by two-thirds.