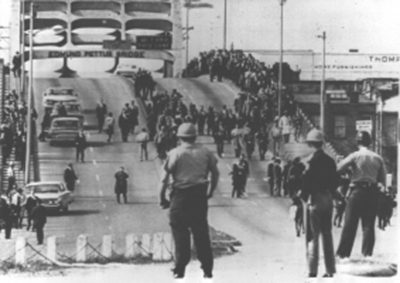 Mar 21, 1965. More than 3,000 civil rights demonstrators led by Dr. Martin Luther King, Jr, began a four-day march from Selma, AL, to Montgomery, AL, to demand federal protection of voting rights. There were violent attempts by local police, using fire hoses and dogs, to suppress the march. A march two weeks before on Mar 7, 1965, was called “Bloody Sunday” because of the use of nightsticks, chains and electric cattle prods against the marchers by the police.