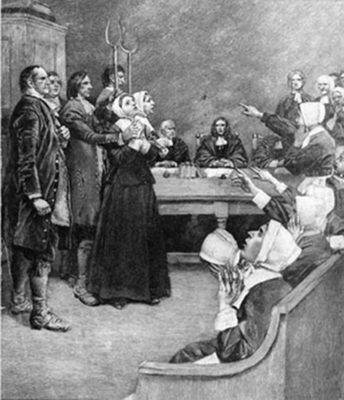 The Massachusetts Bay Colony village of Salem had experienced a strange February in which several teen-aged girls exhibited bizarre behavior and attributed their ailments to witches. Three women were then arrested on 28 February 1692. One of the accused, Tituba, a West Indian slave, broke down under questioning on 1 March and admitted to being a witch. Soon the teen-aged girls accused four other residents, and by the end of April, 19 women had been accused of witchcraft and were languishing in jail— including a four-year-old child. Massachusetts governor Sir William Phips, seeking to control the growing terror, ordered trials held.

In October, the special court was dissolved after growing protests of the trials’ unjust proceedings. By then, 19 people had been hanged, 5 had died in jail, 1 had been tortured to death and more than 150 had been imprisoned. Two dogs were also executed. On 14 January 1697, Judge Samuel Sewall publicly apologized and a court-ordered day of atonement began. In 1711, all those accused of witchcraft were pardoned by the colony’s legislature.