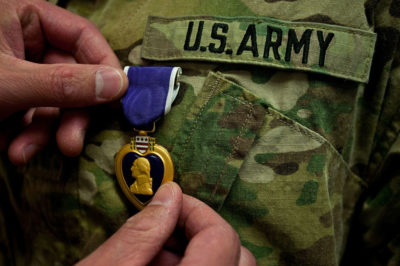 Aug 7, 1782. At Newburgh, NY, General George Washington ordered the creation of a Badge of Military Merit. The badge consisted of a purple cloth heart with silver braided edge. Only three are known to have been awarded during the Revolutionary War. The award was re-instituted on the bicentennial of Washington’s birth, Feb 22, 1932, and recognizes those wounded in action.

Image by Sgt. Michael Selvag, U.S. Army, taken or made as part of his official duties. As a work of the U.S. federal government, the image is in the public domain. Located via Wikipedia.org.