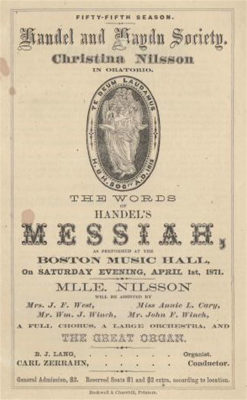 On 13 April 1742, in a charity performance at the New Musick Hall on Fish-amble Street, Dublin, Ireland, George Frederick Handel sat at the harpsichord and conducted the first concert of his masterpiece, Messiah. This sacred oratorio became Handel’s most popular work and has been performed every year since 1742.

Newspapers of the day anticipated the popularity of the first performance and asked ladies not to wear hoops under their skirts and gentlemen not to wear swords so that 700 people could fit into a hall designed for 600. Some years later, King George II stood up in admiration of the Hallelujah Chorus, starting a tradition still followed by audiences to this day.