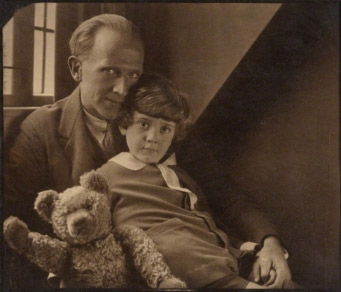 A famous and iconic photograph by Howard Coster of A.A. Milne, his son Christopher Robin and Pooh Bear at Cotchford Farm, their home in Sussex, dated 1926 and in the collection of the National Portrait Galley, London, a gift of the estate of Howard Carter 1959. Fair Use.

Jan 18, 1882. Anniversary of the birth of Alan Alexander Milne, English author, especially remembered for his children’s stories: Winnie the Pooh and The House at Pooh Corner. Also the author of Mr Pim Passes By, When We Were Very Young and Now We Are Six. Born at London, England; died at Hartfield, England, Jan 31, 1956.