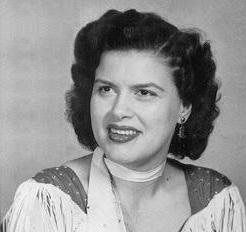 Sept 8, 1932. Country and western singer, born Virginia Patterson Hensley at Winchester, VA. Patsy Cline got her big break in 1957 when she won an Arthur Godfrey Talent Scout show, singing Walking After Midnight. Her career took off, and she became a featured singer at the Grand Ole Opry, attaining the rank of top female country singer. She died in a plane crash Mar 5, 1963, at Camden, TN, along with singers Hawkshaw Hawkins and Cowboy Copas.