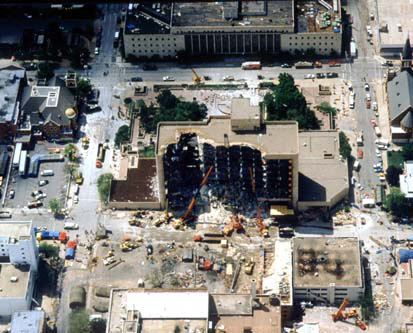 On 19 April 1995, a car bomb exploded outside the Alfred P. Murrah Federal Building at Oklahoma City, OK, at 9: 02 AM, killing 168 people, 19 of them children at a day-care center; a nurse died of head injuries sustained while helping in rescue efforts. The bomb, estimated to have weighed 5,000 pounds, had been placed in a rented truck. The blast ripped off the north face of the nine-story building, leaving a 20-foot-wide crater and debris two stories high. Structurally unsound and increasingly dangerous, the bombed building was razed May 23.