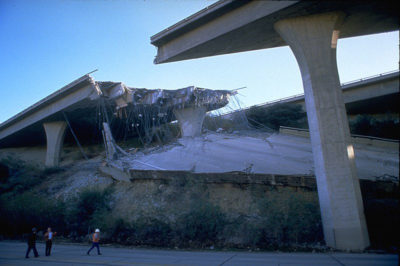 Jan 17, 1994. An earthquake measuring 6.6 on the Richter scale struck the Los Angeles area about 4: 20 AM. The epicenter was at Northridge in the San Fernando Valley, about 20 miles northwest of downtown Los Angeles. A death toll of 51 was announced Jan 20. Sixteen of the dead were killed in the collapse of one apartment building. More than 25,000 people were made homeless by the quake and 680,000 lost electric power. Many buildings were destroyed and others made uninhabitable due to structural damage. A section of the Santa Monica Freeway, part of the Simi Valley Freeway and three major overpasses collapsed. Hundreds of aftershocks occurred in the following several weeks. Costs to repair the damages were estimated at $ 15– 30 billion.