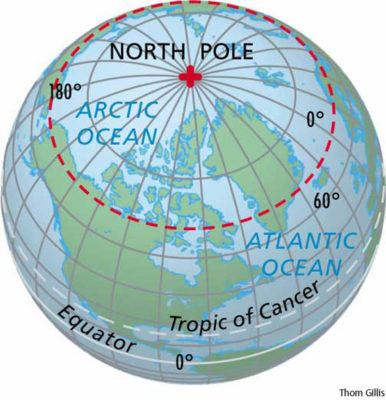 On 6 April 1909, Robert E. Peary reached the North Pole after several failed attempts. The team consisted of Peary, leader of the expedition; Matthew A. Henson, a black man who had served with Peary since 1886 as ship’s cook, carpenter and blacksmith, and then as Peary’s co-explorer and valuable assistant; and four Eskimo guides— Coquesh, Ootah, Eginwah and Seegloo.

They sailed July 17, 1908, on the ship Roosevelt, wintering on Ellesmere Island. After a grueling trek with dwindling food supplies, Henson and two of the Eskimos were first to reach the Pole. An exhausted Peary arrived 45 minutes later and confirmed their location. Dr. Frederick A. Cook, surgeon on an earlier expedition with Peary, claimed to have reached the Pole first, but that could not be substantiated and the National Geographic Society credited the Peary expedition.