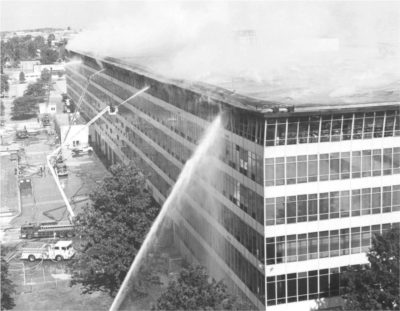 Shortly after midnight on July 12, 1973, a fire swept through the top floor of the National Personnel Records Center (NPRC) in St. Louis. The first firefighting team arrived at the sixth floor of the building within minutes, only to be forced to retreat as their masks began to melt on their faces.

The fire burned uncontrolled for more than 22 hours, and took five days to finally be put out. At its peak, 42 fire districts were fighting it. The cause of the fire is still unknown. The tremendous heat of the fire resulted in shelves warping and the destruction of about 73 to 80 percent of the approximately 22 million individual Official Military Personnel Files (OMPFs) stored in the building . The records lost were those of former members of the Army, the Army Air Force, and the Air Force who served between 1912 and 1963.