Mutiny on the Bounty – Anniversary 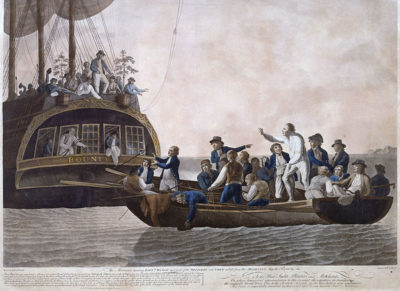 On 28 April 1789, the most famous of all naval mutinies occurred on board HMS Bounty. Captain of the Bounty was Lieutenant William Bligh, an able seaman and a mean-tempered disciplinarian. The ship, with a load of breadfruit tree plants from Tahiti, was bound for Jamaica. Fletcher Christian, leader of the mutiny, put Bligh and 18 of his loyal followers adrift in a 23-foot open boat.

Miraculously Bligh and all of his supporters survived a 47-day voyage of more than 3,600 miles, before landing on the island of Timor, June 14, 1789. In the meantime, Christian had put all of the remaining crew (excepting 8 men and himself) ashore at Tahiti, where he picked up 18 Tahitians (6 men and 12 women) and set sail again. Landing at Pitcairn Island in 1790 (probably uninhabited at the time), they burned the Bounty and remained undiscovered for 18 years, when an American whaler, the Topaz, called at the island (1808) and found only one member of the mutinous crew surviving. However, the little colony had thrived and, when counted by the British in 1856, numbered 194 persons.