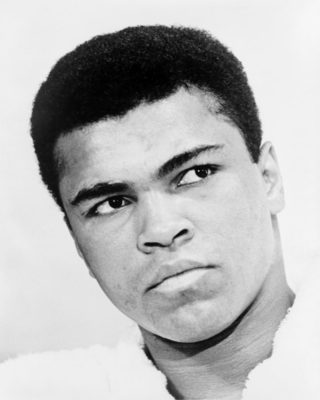 Muhammad Ali born Jan 17, 1942. Born Cassius Clay at Louisville, KY, boxing’s “The Greatest” lived up to his nickname: winning the gold medal in the light heavyweight division at the 1960 Rome Olympics and winning the world heavyweight title three times (1964, 1974, 1978). Ali was also nicknamed the “Louisville Lip”— always ready with a quote-worthy quip or challenge. He converted to Islam in 1964 (under Malcolm X’s mentorship) and dropped his “slave name” for that of Muhammad Ali. Later, as a conscientious objector, he refused to be drafted to fight in the Vietnam War— he was arrested and stripped of his title. In a battle that went to the US Supreme Court in 1971, overturned. Ali’s refusal to bow to the establishment, his civil rights beliefs and leadership and his outsize personality made him one of the great iconic figures— in sports or otherwise— of the 20th century. After battling Parkinson’s disease (diagnosed in 1984) for more than thirty years, Ali died at Scottsdale, AZ, on June 3, 2016.

Image by Ira Rosenberg courtesy of the United States Library of Congress‘s Prints and Photographs division under the digital ID cph.3c15435.