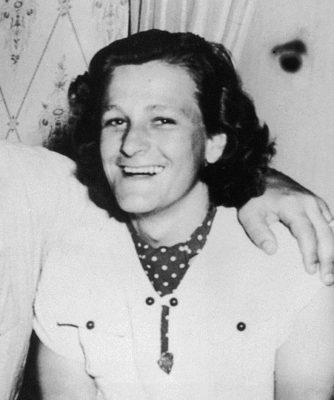 June 26, 1911. Born Mildred Ella Didrikson at Port Arthur, TX, the great athlete was nicknamed Babe after legendary baseball player Babe Ruth. She was named to the women’s All-America basketball team when she was 16.

At the 1932 Olympic Games, she won two gold medals and also set world records in the javelin throw and the 80-meter high hurdles; only a technicality prevented her from obtaining the gold in the high jump.

Didrikson married professional wrestler George Zaharias in 1938, six years after she began playing golf casually. In 1946 Babe won the US Women’s Amateur tournament, and in 1947 she won 17 straight golf championships and became the first American winner of the British Ladies Amateur tournament. Turning professional in 1948, she won the US Women’s Open in 1950 and 1954, the same year she won the All-American Open. Babe also excelled in soft-ball, baseball, swimming, figure skating, billiards even football. In a 1950 Associated Press poll she was named the woman athlete of the first half of the 20th century. She died of cancer on Sept 27, 1956, at Galveston, TX.