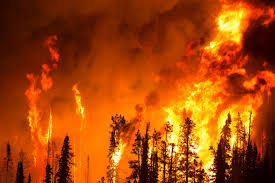 Sept 5, 1881. According to the Michigan Historical Commission, Small fires were burning in the forests of the Thumb area of Michigan, tinder-dry after a long, hot summer, when a gale swept in from the southwest on Sept 5, 1881. Fanned into an inferno, the fire raged for three days. A million acres were devastated in Sanilac and Huron counties alone. At least 125 persons died, and thousands more were left destitute. The new American Red Cross won support for its prompt aid to the fire victims. This was the first disaster relief furnished by this great organization.