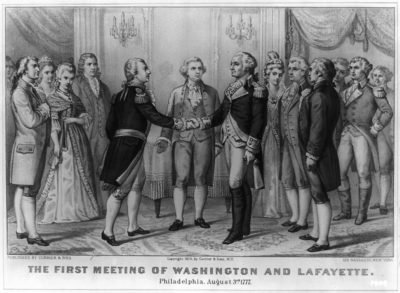 Sept 6, 1757. The French general and aristocrat, whose full name was Marie-Joseph-Paul-Yves-Roch-Gilbert du Motier, came to America to assist in the revolutionary cause. Lafayette, who had convinced Louis XVI to send 6,000 French soldiers to assist the Americans, was given command of an army at Virginia and was instrumental in forcing the surrender of Lord Cornwallis at Yorktown. He was called The Hero of Two Worlds and was appointed a brigadier general on his return to France in 1782. He became a leader of the liberal aristocrats during the early days of the French revolution. As the commander of the newly formed national guard of Paris, he rescued Louis XVI and Marie-Antoinette from a crowd that stormed Versailles Oct6, 1789. His popularity waned after his guards opened fire on angry demonstrators demanding abdication of the king in 1791. He fled to Austria with the overthrow of the monarchy in 1792, returning when Napoleon Bonaparte came to power. Born at Chavaniac, he died at Paris, May 20, 1834.