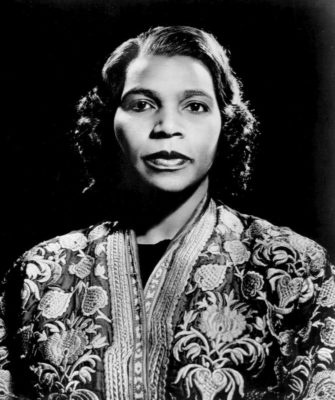 On 27 February 1897, opera singer Marian Anderson was born at Philadelphia, Pennsylvania. Anderson’s talent was evident at an early age. Her career stonewalled by the prejudice she encountered in the US, she moved to Europe, where the magnificence of her voice and her versatility as a performer began to establish her as one of the world’s finest contraltos.

Preventing Anderson’s performance at Washington’s Constitution Hall in 1939 on the basis of her color, the Daughters of the American Revolution unintentionally secured for her the publicity that would lay the foundation for her success in the States. Her performance was rescheduled, and on 9 April 1939 (Easter Sunday), 75,000 people showed up to hear her sing from the steps of the Lincoln Memorial. The performance was simultaneously broadcast by radio. In 1955 Anderson became the first African American to perform with the New York Metropolitan Opera. The following year President Dwight Eisenhower named her a delegate to the United Nations. She performed at President John F. Kennedy’s inauguration and in 1963 received the Presidential Medal of Freedom. Anderson died 8 April 1993, at Portland, Oregon.