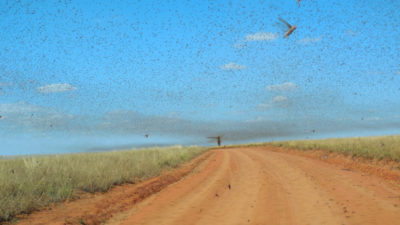 July 20 30, 1874. The Rocky Mountain locust, long a pest in the American Midwest, became an even bigger threat in the summer of 1874. Beginning in late July, the largest recorded swarm of this insect descended on the Great Plains. It is estimated that 124 billion insects formed a swarm 1,800 miles long and 110 miles wide that ranged from Canada and the Dakotas down to Texas. Contemporary accounts said that the locusts blocked out the sun and devastated farms in mere minutes. The swarms continued in smaller size for the next several years and caused an estimated $ 200 million in crop destruction.