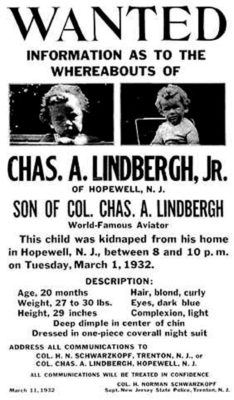 Mar 1, 1932. Twenty-month-old Charles A. Lindbergh, Jr, the son of Charles A. and Anne Morrow Lindbergh, was kidnapped from their home at Hopewell, NJ. Even though the Lindberghs paid a $ 50,000 ransom, their child’s body was found in a wooded area less than five miles from the family home on May 12. Bruno Richard Hauptmann was charged with the murder and kidnapping. He was executed in the electric chair Apr 3, 1936.

As a result of the kidnapping and murder, the Crime Control Act was passed on May 18, 1934, authorizing the death penalty for kidnappers who take their victims across state lines.