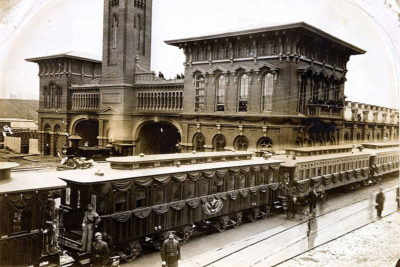 Apr 21– May 4, 1865. After President Abraham Lincoln’s death and a Washington, DC, funeral, a special train was used to transport the body to its final resting place at Springfield, IL. An un-utilized train called The United States, which had been built for presidential travel, was transformed into a nine-car funeral train.

On Apr 21, 1865, with the President’s portrait fastened on the front of the engine, “The Lincoln Special” began its 1,654-mile journey through 444 communities in seven states from Washington to Springfield. Millions of people came out over two weeks to see the passing funeral train. At a dozen scheduled stops, the coffin was transported by horse-drawn hearse to public buildings, including Philadelphia’s Independence Hall, where Lincoln lay in state and mourners waited for up to five hours to pass by the closed coffin. Lincoln was buried on May 4.