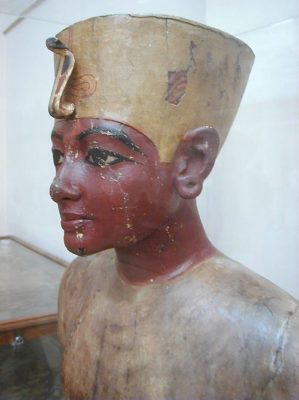 Likeness of the child king, Tutankhamen

Nov 4, 1922. In 1922, one of the most important archaeological discoveries of modern times occurred at Luxor, Egypt. It was the tomb of Egypt’s child-king, Tutankhamen, who became pharaoh at the age of nine and died, probably in the year 1352 BC, when he was 19. Perhaps the only ancient Egyptian royal tomb to have escaped plundering by grave robbers, it was discovered more than 3,000 years after Tutankhamen’s death by English archaeologist Howard Carter, leader of an expedition financed by Lord Carnarvon. The priceless relics yielded by King Tuts tomb were placed in Egyp’ts National Museum at Cairo.

Image located via Wikipedia.org and transferred from Egypt Archive website under the license Copyrighted free use (see permission here).