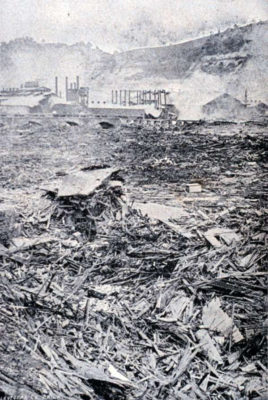 May 31, 1889. Heavy rains caused the Connemaugh River Dam to burst. At nearby Johnstown, Pennsylvania, the resulting flood killed more than 2,300 people and destroyed the homes of thousands more. Nearly 800 unidentified drowning victims were buried in a common grave at Johnstowns Grandview Cemetery. So devastating was the flood and so widespread the sorrow for its victims that Johnstown Flood entered the language as a phrase to describe a disastrous event. The valley city of Johnstown, in the Allegheny Mountains, has been damaged repeatedly by floods. Floods in 1936 (25 deaths) and 1977 (85 deaths) were the next most destructive.