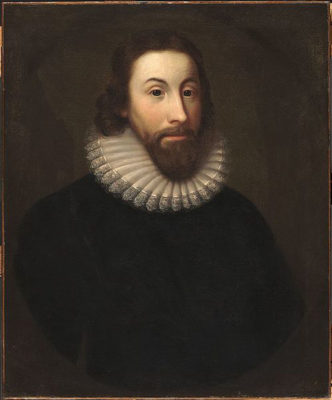 Born at Edwardstone, Suffolk, on 12 January 1588 (Old Style), Puritan John Winthrop is renowned for his leadership in the migration to the Massachusetts Bay Colony and the key role he played in developing its character and its relationship with neighboring colonies and indigenous people. Father of 16 children, most notably son John, who was governor of the Connecticut Colony. Winthrop served 13 annual terms as governor of the Massachusetts Bay Colony from his arrival in 1630 to his death on 26 March1649, at Boston. He kept a detailed journal, which is now considered the foremost historical record of the era.