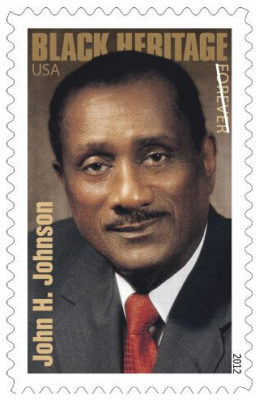 Jan 19, 1918. Born at Arkansas City, AR, the grandson of a slave, John H. Johnson rose from abject poverty to become one of the most influential black businessmen in America. In 1942 he launched the first of his successful magazines, Negro Digest, which reached a circulation of 50,000 within eight months. In 1945 came Ebony, followed by Jet in 1951. By the time of his death at Chicago, IL, on Aug 8, 2005, Johnson’s company was the world’s largest African-American owned-and-operated publishing operation. He served the US as goodwill ambassador and received numerous honors, the most important of which was the Presidential Medal of Freedom in 1996 for “building self-respect in the black community.”

A commemorative stamp  was released in his honor in 2012.