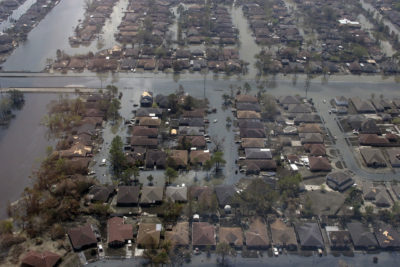 Aug 29, 2005. After hitting the southern Florida coast on Aug 25, Hurricane Katrina moved into the Gulf of Mexico and grew into one of the most devastating hurricanes in US history. On this date, as a Category 3 storm, it struck Buras, LA, and surrounding areas, destroying communities up and down the Gulf Coast. Levees in New Orleans were breached, and within two days more than 80 percent of the city was underwater, strandingtens of thousands of people. The death toll in Louisiana, Mississippi, Alabama and Florida was more than 1,300, with more than 1,000 fatalities coming in Louisiana. Thousands remained missing at the end of 2005. The estimated one million people evacuated before and after the storm accounted for the largest movement of people in the US since the Great Depression and the Civil War. And with $ 100 billion to $ 200 billion in damage over 90,000 square miles, Hurricane Katrina was the most expensive natural disaster in US history.