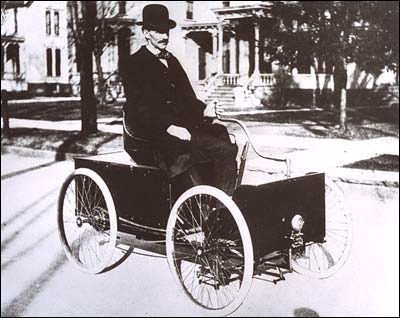 July 30, 1863. Industrialist Henry Ford, whose assembly-line method of automobile production revolutionized the industry, was born at Wayne County, MI, on the family farm. His Model T made up half of the worlds output of cars during its years of production. Ford built racing cars until in 1903 he and his partners formed the Ford Motor Company. In 1908 the company presented the Model T, which was produced until 1927, and in 1913 Ford introduced the assembly line and mass production. This innovation reduced the time it took to build each car from 12 hours to only 1 . This enabled Ford to sell cars for $ 500, making automobile ownership a possibility for an unprecedented percentage of the population. He is also remembered for introducing a $ 5-a-day wage for automotive workers and for his statement History is bunk. Died Apr 7, 1947, at age 83 at Dearborn, MI, where his manufacturing complex was located.