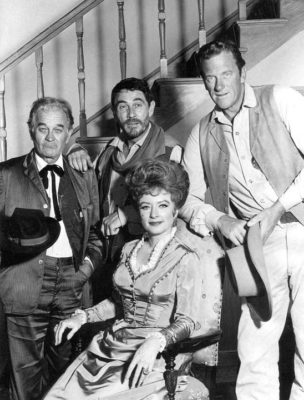 Sept 10, 1955. Gunsmoke was TVs longest-running western, moving from radio to TV. John Wayne turned down the role of Marshall Matt Dillon but recommended James Arness, who got the role. Other regulars included Amanda Blake as Kitty Russell, saloon-owner; Dennis Weaver as Chester B. Goode, Dillons deputy; and Milburn Stone as Doc Adams. In 1962 Burt Reynolds joined the cast as Quint Asper, followed by Roger Ewing as Thad Greenwood and Buck Taylor as Newly OBrien. In 1964 Ken Curtis was added as funnyman Festus Haggen, the new deputy. Gunsmoke was the number-one rated series for four seasons, and a top 10 hit for six seasons. The last telecast was Sept 1, 1975.