Gunfight at the O.K. Corral – Anniversary 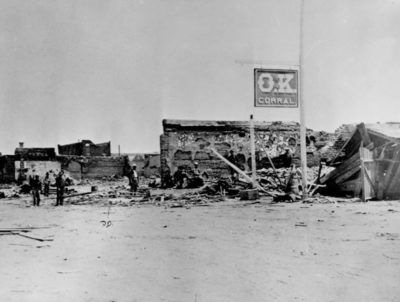 Oct 26, 1881. At 2: 30 PM, the Earp brothers and gambler/ dentist Doc Holliday confronted the Clanton and McLaury brothers at a vacant lot behind the O.K. Corral at Tombstone, AZ.  After 30 seconds of gunfire, three deaths and decades of romanticizing, the incident would become the most notorious of the Old West. Marshal Virgil Earp and Deputy Marshals Wyatt and Morgan Earp attempted to disarm the Clanton faction, when gunfire erupted, although some witnesses claimed that the Clantons and McLaurys threw up their hands when ordered to. Billy Clanton and Frank and Thomas McLaury died. Virgil and Morgan Earp were wounded. After a 30-day murder trial, the presiding judge dismissed the charges, stating that the Earps and Holliday had acted in self-defense.

Image: O.K. Corral in Tombstone, Arizona after a fire in 1882, Public Domain.