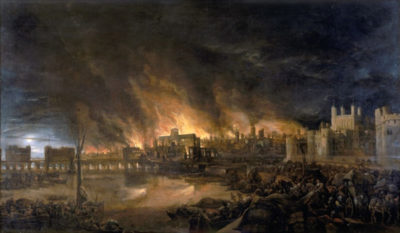 “The Great Fire of London by an unknown painter, depicting the fire as it would have appeared on the evening of Tuesday, 4 September 1666 from a boat in the vicinity of Tower Wharf. The Tower of London is on the right and London Bridge on the left, with St Paul’s Cathedral in the distance, surrounded by the tallest flames.”

Sept 2 5, 1666. (Old Style date.) The fire generally credited with bringing about our system of fire insurance started Sept 2, 1666 (OS), in the wooden house of a baker named Farryner, at London’s Pudding Lane, near the Tower. During the ensuing three days more than 13,000 houses were destroyed, though it is believed that only six lives were lost in the fire.