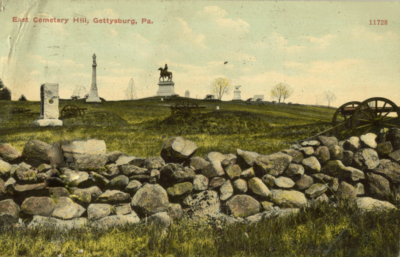 Nov 19, 1863. In 1863, 17 acres of the battlefield at Gettysburg, PA, were dedicated as a national cemetery. Noted orator Edward Everett spoke for two hours; the address that Lincoln delivered in less than two minutes was later recognized as one of the most eloquent of the English language. Five manuscript copies in Lincolns hand survive, including the rough draft begun in ink at the executive mansion at Washington and concluded in pencil at Gettysburg on the morning of the dedication (kept at the Library of Congress).