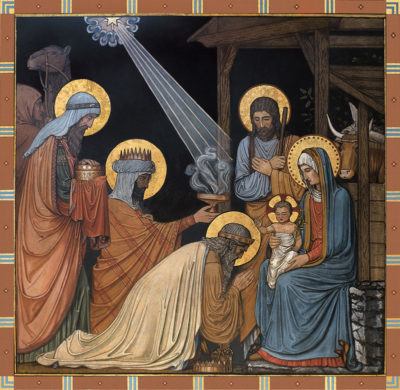 On the 12th day after Christmas, Christians celebrate the visit of the Magi, the first Gentile recognition of Christ. Epiphany of Our Lord, one of the oldest Christian feasts, is observed in Roman Catholic churches in the US on a Sunday between Jan 2 and 8. Theophany of the Eastern Orthodox Church is observed in churches using the Gregorian calendar (Jan 19 in those churches using the Julian calendar). This feast day celebrates the manifestation of the divinity of Jesus at the time of his baptism in the Jordan River by John the Baptist. Note: In centuries past, the day began at sunset. This custom has often led to confusion between Twelfth Night and Twelfth Day.

Image:  “Adoration of the Magi” in the Basilica of the Immaculate Conception at Conception Abbey in Conception, Mo.