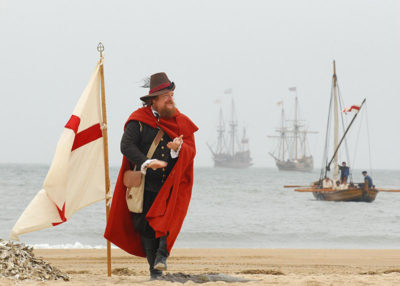 070426-N-1688B-163.jpg Virginia Beach, Va. (April 24, 2007) – John Smith, played by Dennis Farmer, claims the beach for England during the re-enactment ceremony on the 400th anniversary of the First Landing in the, “New World.” Settlers from the ships the Godspeed, Discovery and the Susan Constant landed in Virginia Beach and stayed for four days before moving to Jamestown. U.S. Navy photo by Mass Communication Specialist Seaman Matthew Bookwalter. (RELEASED)

Before the English colonists established Jamestown as the first permanent English settlement in the New World, they landed at Cape Henry in what is now Virginia Beach, Virginia. That was April 26, 1607.